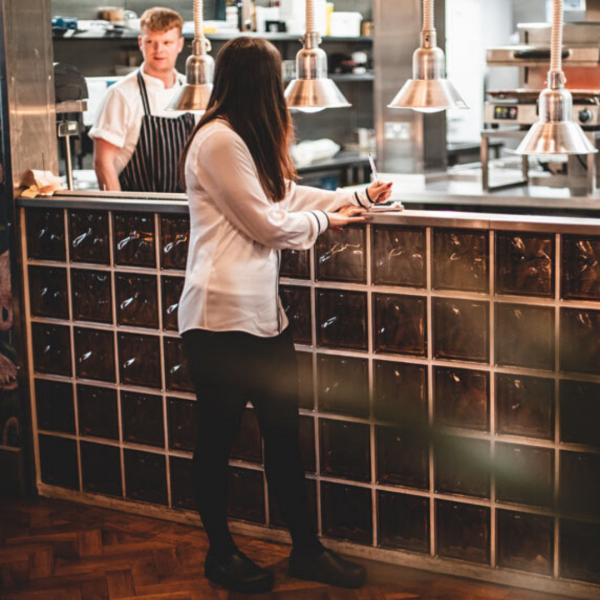 Building a reliable social media following for your restaurant takes a lot of time, effort and learning from mistakes. Yet, you see restaurants and food being posted on every platform imaginable. Interestingly, a study has revealed that there are 5.7 billion food-related pins on Pinterest and research has found that based on an average day on Twitter for the food industry, 26.31 tweets can generate 86.32 replies, 511.01 @-mentions and 121.74 retweets. 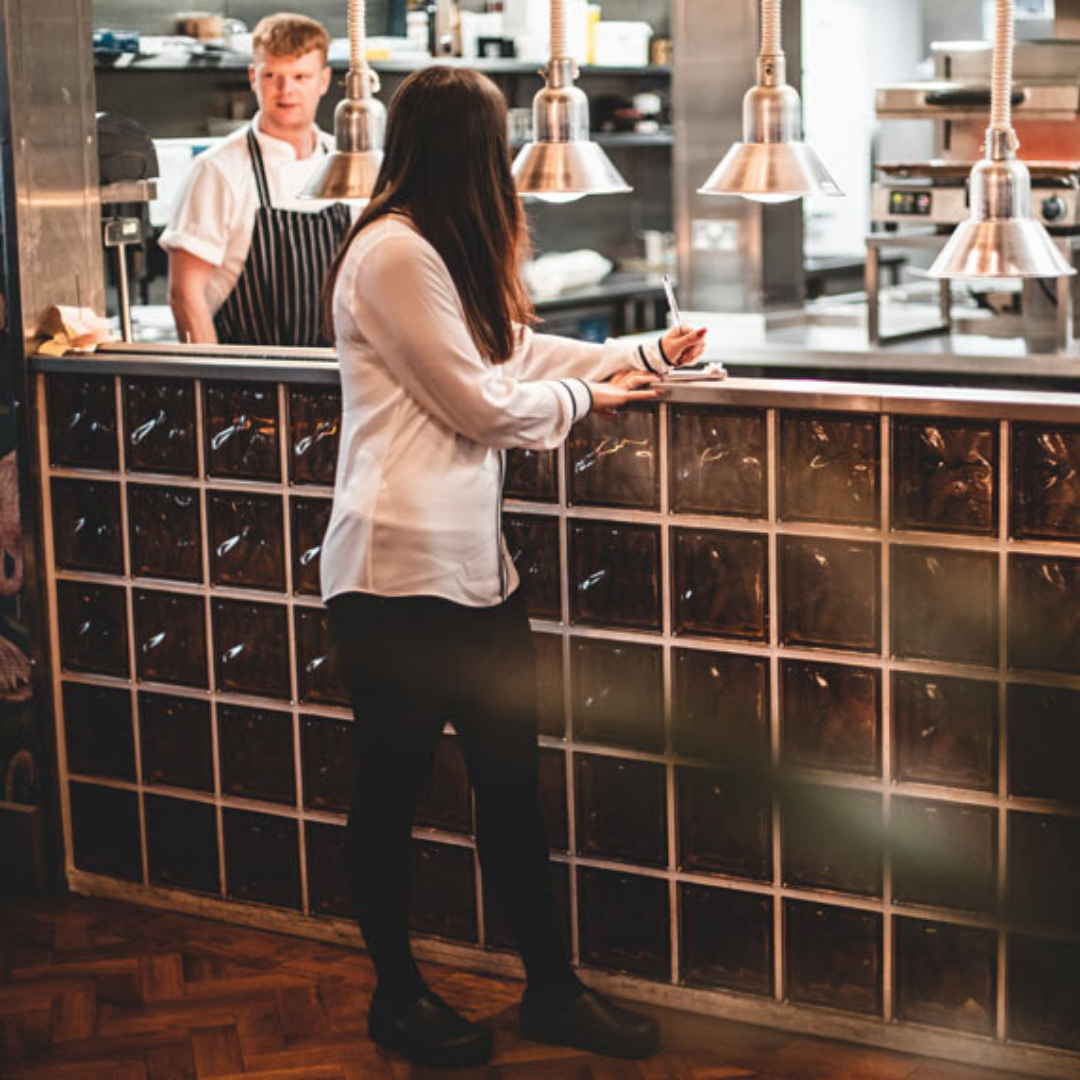 To get a piece of this action, it's important to make the most of social media to improve your restaurant's reach, but don't make some of these easy-to-avoid errors:

An example of this comes from T.G.I. Friday's who wanted half a million Facebook fans as part of a marketing campaign. They made a limited-time offer to people, asking them to become a fan of the page before a particular month and they'd receive a free burger for doing so.

Obviously, the figures racked up and they're boasting well over a million fans now. Whilst the campaign was largely a success, it still drew plenty of criticism all because of a character named Woody.

Woody was active throughout the Facebook page, posting comments and responding to complaints from customers. But Woody was a fake account run by T.G.I. Friday's themselves.

They deleted the account without explanation and it emerged it was originally set up as a fake account to gain traction - deceit is not something your following will take too kindly to.

Another technique to achieve the same goal as running your own fake account is to buy followers and interactions on social media. However, as you'll be aiming for regular diners from within your catchment area, it will soon become noticeable that your followers and RTs are artificially high.

"This restaurant always gets thousands of likes and retweets, but I don't know anyone who's been. Do you?"

A crucial mistake your restaurant can make is not having a strategy on when to post on your social media accounts. Although people can be browsing social media at any time, posting at 2AM when the world is asleep isn't going to get you any traction or get the latest deal your restaurant has on offer noticed. Even if that's when you unwind after the car park empties.

Timing is everything on social media because you want to ensure people are seeing your content and it isn't getting hidden at the bottom of their feeds. However, research has shown the best times restaurants should post their content on social media on different platforms.

While plenty of restaurants will be posting at the same time, it's still the best way for you to get noticed at these peak times as posting too early in the day or late at night is only reducing your reach.

Make sure your images are strong and your messaging tempts people to visit you that night.

Avoid responding negatively to feedback or reviews, as it only shows other followers and potential customers that the service isn't great. Along with this, don't ignore or delay the response to negative feedback and comments. This is your chance to turn unhappy customers into loyal ones by apologising and asking for further feedback, or even offer something for free on their next visit.

If you're engaging with customers on social media if they weren't happy when they visited your restaurant, then it shows that you care and value their input which will prompt other visitors to give you a chance, rather than ignore you completely. 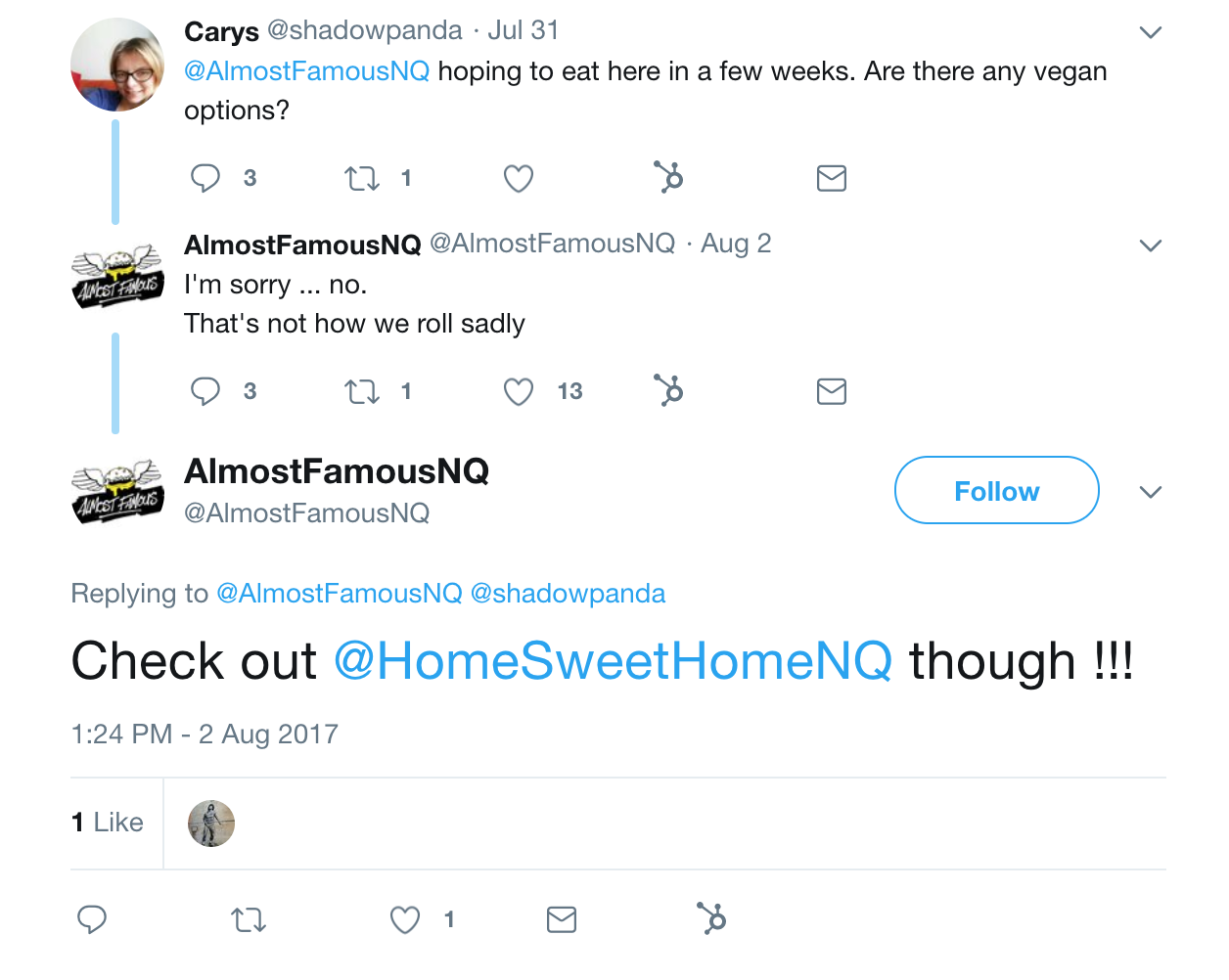 Here's how to leave somebody who could be left disappointed with a better chance of still recommending you to a friend. The suggested vegan-friendly restaurant is a stone's throw away so will fit into Carys' agenda.

Promotion is obviously the key to enticing people into visiting your restaurant. However, spamming their feeds with countless or irrelevant offers can result in them unfollowing you. If that happens, they'll continue to browse social media with the assumption that your restaurant promotes too much and they won't be tempted to actually visit.

Instead, link this with the second point and save your best promotion material for the peak times. Most promotional posts talk about discounts or specific products, so don't publish five social media posts in the space of a day all promoting the same offer.

As you can see above, Wendy's in the US posted on Instagram to advertise an offer that left a lasting impact and didn't need to be over-promoted. In fact, even if the humour or informality doesn't suit your restaurant's brand, take a look at how personable, interactive and human Wendy's are on Twitter.

Social media for your restaurant shouldn't just be another place to put ads, but it's a place to show your human side and interact with customers. Keep your content informative, but conversational and humorous. If your audience feels like they're being advertised to, then they'll quickly disconnect.

Take a look at your personal social media feeds and see which brands are worth following in their own right, rather than just for product launches and offer announcements. Then see what you can borrow and apply to your own restaurant.

Social media puts you, potentially, in front of every single person (some indirectly) who could pay you a visit. Build a community filled with fun and interaction, and you will have an online form of "word of mouth" doing your marketing for you.

5. Don't Bandwagon Onto Random Hashtags For The Sake Of It

Misused hashtags can scupper all your best-laid plans if you start using them out of context. The worst case scenario is that you see a hashtag trending in your area and you make light of a negative or inflammatory situation. Check out this truly harrowing, real-life example, from a frozen pizza manufacturer, DiGiorno.

To illustrate, not that you'd do this, but "#thankyoufireservice" might be trending in your area so you post something about your flame grilled burgers being made fresh and you've prepped so many you need the fire service to cool your kitchen down.

Now you know the crucial things to avoid on social media for your restaurant, you shouldn't forget about how to keep your workers safe inside of your restaurant. Encouraging workers to wear slip-resistant footwear will reduce the risk of slips, trips and falls, the most common workplace accident. To help them wear shoes that will get them home safely, purchase footwear that surpasses minimum ISO standards.

Take Your Restaurant to the Next Level

Leave your customers coming back for more by taking your restaurant from good to great. Download our free guide with some useful tips now.